In support of both our sanity and overall well-being, the 15-minute city may actually become more in-demand in a post-COVID world.

Thanks to Patrick Sisson, his article in City Monitor helps us understand not just the concept but the current value and timeliness to revisit this concept.

There’s already compelling evidence that the 15-minute city can work. Replacing long commutes and car-first transit with bikes and walking would slash vehicle emissions, increase resident health and free up roads and parking spaces for other uses.

Most trips taken in cities are pretty short. Research on U.S. households’ driving habits found that nearly 60% of their one-way trips are less than six miles (9.6km), and 75% of all trips are ten miles or less. It’s worth acknowledging that the 15-minute city seems so bold and transformative precisely because the way we design cities now is antithetical to its goals.

Makes us recall the “revolution” that was Marina City in the 1960’s in Chicago. 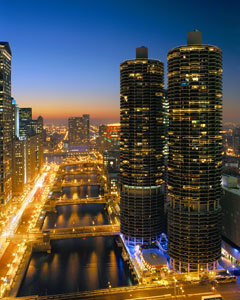 The concept was to be a self-contained “city”:

By the end of 1964, Marina City housed a grocery store, pharmacy, florist, gift shop, travel agency, bank, barber shop, beauty salon, restaurants and bars. A health club would soon be added, including a swimming pool. There was a skating rink and sculpture pavilion. Tour guides wore uniforms that were marine blue in color with gold insignia. A “teleview teller” near the tunnel to the office building was the 1960s version of an ATM, allowing the user to see the teller at Marina City Bank on closed-circuit television. (courtesy of  Marina City Fun Facts)

Unfortunately, the idea went into decline in the late 1970’s.

Today, we see the live/work/play becoming more prominent in more developments. Examples in Metro Chicago include the $200 million redevelopment of Hawthorn Mall in Vernon Hills, the Optima Signature in Streeterville with apartments, flexoffices and shopping.

Other places pursuing the 15- or 20-minute-city concept include:

But in the COVID era, where lockdowns and transit shifts have made urban dwellers reorient their lives and rediscover their immediate neighbourhoods, the 15-minute city may have caught its stride at the perfect time. For years, consumer megatrends have championed local shopping and food, supporting neighbourhood businesses as well as urbanisation and car-free lifestyles.

So, just as we see this taking shape in urban neighborhoods, the suburbs are seeing a resurgence, since the elimination or reduction in commuting. Having regained a significant chunk of time (perhaps 1.5 hours/day), the 15-minute city may finally have it’s day in the US.

to learn more please visit our Services page or simply reach out to hello@yes-spaces.com

Solving for "Flex" - Planning for the Hybrid Workforce