As we approach the RTO (Return to Office) in Q4 2022, how do we explore more intentional space design for collaboration, productivity and community?

Why open-plan design is “lazy”, per Brad, and what trends are we seeing to address 5 Generations in the Workplace (GenZ to Boomer?)

To learn more from Brad,  please reach him at brad.riemann@unispace.com

Brad – It’s definitely an open-ended question. I think, depending on the depending on the firm, depending on the type of business, it really varies. I know that’s where UNISPACE brings our strategy team a lot to really elaborate that because I like for example, I know like law firms are coming a lot back into the office a lot, and they’re hitting close to like 60%, 80% occupancy. Meanwhile, I think on average, it’s around 45% to 50%, in Chicago. So really, it just varies. The one thing we are seeing a lot more of as well our proprietary things called Propeller, or basically it’s causing a multi- use space. So bringing, trying to encourage, definitely like the younger generation to come back into the office so whether it’s through bars or ping pong tables and the etcetera. And those type of things and are can designers can stress more though as aspects. But then of course, having more flexible, having the meeting spaces and having these type of things. But really, the office space as a general, I think is just changing. It’s no longer big open office with open floor plan. It’s just throw up a bunch of furniture. Now it’s to the point where there’s a lot more getting things to come back in and causing people to be interactive, whether that’s lunches and things like that, or just, but ultimately, it depends on the business and depends on the model.

Wendy – It sounds like it’s becoming more intentional in design, because open plan to some degree, nobody really liked it. But it had it had its purpose, right. And so now it’s more intentional, with more purpose-built spaces, not just for community and collaboration, but also focused work and even content studios. Is that something that you’re finding that’s true?

Brad – Yeah, absolutely. I think I just had a thing last week and a friend colleague of mine was basically like, can we get rid of the Open Office? And a part of me from the design background, it’s like an open office, it’s a little bit lazy. It’s just like, hey, we’ll just throw this furniture in there. And it’s not real, innovative solutions, but it’s now about thinking how we can delineate that space and think about how we can do it better. And, I mean, it was kind of going that way already pre-pandemic, and now it’s just definitely been fast-tracked, especially at a competitive job market, things like that.

Wendy – Yeah. Are you finding that you’re designing differently now that there are multiple generations and I mean, for again, for the first time, what five generations in the office setting, is that making any difference?

Brad – Yeah, definitely. These are a lot of the conversations. I think our strategy team has a lot with people like including HR, including all these people in the conversation. It’s more companies. Yes, I think so. Because you’re trying to get that Gen Z-er who’s never worked in the office to see the exposure and pick up those things that you don’t pick up from just sitting on Zoom calls that day. But at the same time, though, a lot of times the Baby Boomer who was like looking to retire, like they’re just they have the routine, or they’re coming in 50, 60 hours a week, and they want to be in there. So it’s trying to accommodate all these people. And really, that’s that’s really the challenge is figuring out what your square footages are, how that breaks down for spaces, and then what works for you. And ultimately, how to, make everyone happy and get along with them and also increase productivity, which I think the one thing get back to when I originally said as well is like if you’re coding all day, you’re probably fine working remote, 80 hours a week. But if you’re, but if you’re an attorney, if you’re an architect, if you’re somebody who needs that cross collaboration, you need to be back in the office more because otherwise, it’s hard to develop career-wise, a lot of those soft skills that are not directly directly part of your day to day job.

Wendy – And I think for creativity, it’s great to work off of other minds, right, in order to get the inspiration and somebody else’s point of view as well.

People need to be around others to promote creative thinking

Brad – Yeah, yeah. I mean, I’ve seen it I think, just personally, I like just being around the last few people roles I’ve had I’ve had like boss or even boss’s boss around and I like just hearing those things, knowing what’s going on with the organization, picking up things that are going on elsewhere. But you don’t get those when you’re away for remote-wise like you. And I think so often we’re like, oh, yeah, I’ve been here for three months. I go, I haven’t met you. But it’s because you don’t have that those impromptu meetups around the kitchen or watercooler, so to say, that you got before definitely.

Wendy – Exactly. Well, Brad, how can people reach you if they want to get in touch with you at UNISPACE?

Brad – Well definitely look me up on LinkedIn. Brad, Riemann br ad ri e ma nn that’s probably the easiest way to reach out to me professionally. Obviously, check out unispace.com We got a lot of strong stuff. Our marketing team is putting in a lot of information and research and stuff about what the future of work looks like and industry-specific and how things are going. But uh, yeah, definitely reach out if you’re trying to figure out what to do with the workplace.

Wendy – Thank you so much.

Landlords and Developers with occupancy issues AND who want higher revenue per s.f. , click here. 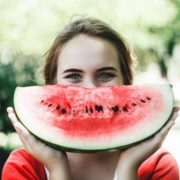 Nick Ramirez of BKV Group on Repositioning and Repurposing Space 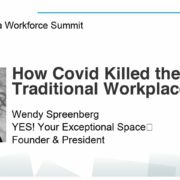